to the preservation of the

We are hobby breeders dedicated to the preservation of the Rhodesian Ridgeback.

Sound in body, mind and health – Upstanding, athletic and the ultimate companion animal.

Maureen acquired her first Rhodesian Ridgeback in 1989.  Her name was Cheebah and she became Kimani’s Bad and Beautiful, UD, multiple all breed High in Trial as well as the #1 Obedience Ridgeback in the USA for three years. It was here that her love for the Rhodesian blossomed and she has not been without one since.

Maureen first started in purebred dogs in 1984 with a Golden Retriever, Cooper. This family pet opened up the gateways to her fascination with canines and changed her life forever.  Cooper went on to earn his AKC UD, Canadian CDX and half way through his OTCH before an injury retired him, earning HIT and High Combined along the way.  Through him Maureen learned much about the language of canines and pursued various areas of interest in understanding behavior as well as training techniques and modalities.

Although she no longer competes in obedience competition, this foundation has served her well in raising Rhodesian Ridgebacks, puppy rearing, and training dogs for the Conformation Ring and other activities.

Her current successes are with Bango, Silver GCH Lyonnese Master’s Blend by Kimani who earned the 2015 RRCUS National Specialty Best of Opposite and #1 Stud Dog Winner, and went on to earn Top Ten status nationwide. This National also awarded top honors to a sister and brother team earning BISS Best in Specialty Junior Sweeps Winner and Best of Opposite Junior Sweeps, who were bred, born, reared and trained by Lyonnese family.

Maureen has had the honor of judging multiple RRCUS Supported Sweepstake shows and has been a respected member of the National Breed Club (RRCUS) for many years.  She is an AKC Breeder of Merit and continues to breed for health, temperament and excellence.

Maureen has bred, co-bred, whelped, reared, observed and selected many Ridgebacks over the years.  They are her passion and her love.

Theresa is a magazine publisher,  professional graphic artist and talented dog photographer. She founded and published the award-winning Ridgeback Register magazine for 25-years, and made it synonymous with eye-catching design, stunning photography and quality journalism.

She is the Art Director/Designer for Sighthound Review and Whippet Review magazines, and a freelance designer for owners and handlers of multiple breeds.

Theresa has been involved in the sport of dogs since 1990 and has shown Golden Retrievers, Viszlas, Saint Bernards, Pointers, French Bulldogs and Rhodesian Ridgebacks. She has judged multiple RRCUS Supported and Regional Specialty Sweepstakes events all over the U.S. and is currently working towards AKC judging status.

She prides herself on pedigree knowledge and continued canine anatomy studies.  She has attended multiple breed specialties, including seminars focusing on breed standards, health and genetics as well as form and function.

In 2015 Theresa was honored to co-own Bango, Silver GCH Lyonnese Master’s Blend by Kimani. Not only was he the 2015 RRCUS National Specialty Best of Opposite and #1 Stud Dog Winner, but finished the year as the Number TEN Rhodesian Ridgeback. For Theresa, who helped handle Bango part-time, the highlight of the year was piloting him to multiple Group Placements in top hound competition.

Proudly serving four-years active duty in the U.S. Marine Corps, Theresa is married with three children and is a member of many organizations, including the Princeton Dog Training Club, Western Hound Association of Southern California, Plainfield Kennel Club, Pointer Club of America as well as the Dog Writers Association of America and the Alliance of Pure Breed Dog Writers. She is currently a Board of Director for the Rhodesian Ridgeback Club of the United States.

Theresa’s passion for the breed expands more than two-decades and she continues to learn and grow as an owner and breeder of this majestic and loyal breed.

Debbie has been a dog enthusiast since she was a child growing up with various mixed breeds. Her first AKC registered purebred dogs were German Shorthair Pointers. She shared these dogs with her former husband as gun dogs.   She is a Mother, as well as professional designer handbag specialist at an upscale department store.  She fell in love with the Rhodesian Ridgeback after seeing one at a grooming shop in the mid 90’s.  She knew someday she would own this majestic breed.  The elegant look of the Rhodesian was a natural fit for her, as well as a perfect companion for her son.

In the Spring of 2004, she purchased her first Ridgeback as a family pet.  She instantly fell in love with the breed and acquired a family companion male in 2006 from Kushinda Ridgebacks. Since then she has always had a male and female Ridgeback in her residence.   She cannot imagine life without a Ridgeback as the breed has truly brought her more joy than she could imagine.

After Debbie acquired her first show dog, Zulu, now GCH Kushinda’s Edge of Glory, she met Maureen Tauber of Lyonnese Ridgebacks.  She quickly finished Zulu’s Championship and was bitten by the dog show bug. Through instruction and education from Maureen and others Debbie became a competitive owner-handler.

Debbie’s first show bitch was Satara, now GCH Kimani’s Set in Gold, whom she co-owns with Maureen.  She was Reserve Winners Bitch at the 2012 National Specialty under respected breeder-Judge Barbara Ruppert, at the tender age of 6 months.  She followed this with a major win at Ocala the next day, soon to be followed by Winner’s Bitch at Westminster in 2013.

Debbie has shown Zulu to several BOB, BOS and Select Dog wins earning points toward his GCH and also earned Satara’s GCH in June 2015. One of her most notable accomplishments was winning Best in Junior Sweeps at the 2015 RRCUS National Specialty with Katanga, now CH Lyonnese Jewel of the Congo, SC.  Being a newcomer to the Rhodesian Ridgeback show world this was beyond wonderful. To show a great young dog to this achievement after such a short time in the dog show world was priceless!

By nature, Debbie is a natural competitor, and loves being around dogs, on many levels.  While she is still learning, she looks forward to the future ahead at Lyonnese. 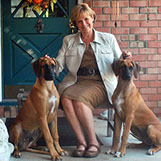 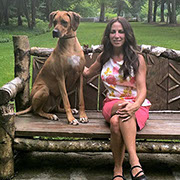